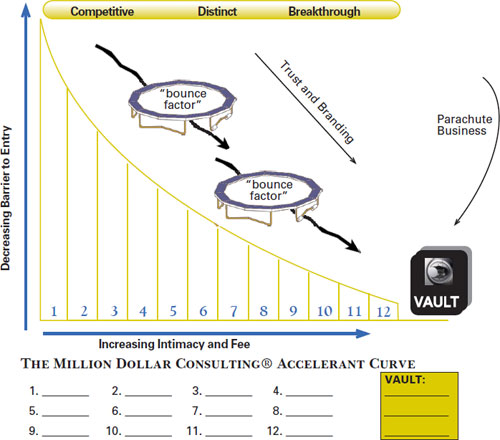 My recent Writing on the Wall video about the accelerant curve for consultants (you can find it here on the blog) was so well received, that I thought I’d put some of it in writing here. The concept will appear in three of my new books: Million Dollar Speaking, Million Dollar Coaching, and The Consultant’s Bible.

I call this version the Million Dollar Consulting® Accelerant Curve. The basic concept of decreasing barrier to entry coupled with increasing fees on the two axes was introduced to me first by Mark Smith at a Million Dollar Club meeting two years ago. Since then, I’ve developed the concept specifically for consultants and related professional services providers into the graphic you see here.

The vertical axis represents decreasing barrier to entry, from bottom to top. The horizontal axis represents increasing fee and intimacy (and decreasing labor intensity) from left to right. This blog post, for example would be at the top left: it’s free and there is no intimacy involved—it’s available to anyone who stops by.

The verticals (12 is an arbitrary number simply for my illustration) represent your products and services. The left third, with easy entry and low price (or free) is competitive with others. There is little differentiation. The middle third, however, is distinct: There are distinguishing features which create more personal contact with you and commensurately higher fees. This might comprise personal coaching, workshops, team building, and so forth.

The right third I term “breakthrough” and places you at the leading edge. These are high intimacy and high fee. They might include strategy work, small and very elite workshops, CEO coaching, and so forth.

Finally, the “vault” is composed of value that is uniquely yours with a client. No one else can work that combination. These might include retainers, retreats, licensing of your intellectual property, and so forth. Note that these actually represent less labor intensity for higher fees!

The idea of the accelerant curve is to encourage clients to move down the curve to higher value and higher profit offerings. The curve’s ability to move people along relies on the trust and credibility established toward the left. It’s vitally important not to have any “chasms” so that people don’t fall off the chart as they slide forward! Whatever your number of offerings, you need them spread across the three categories.

Having said that, once you build brand and repute, you attract “parachute business.” That is business which travels immediately to your higher-end offerings, because trust has been established by referral, word-of-mouth, and market gravity. This business lands on the right side of the curve, or even in your vault.

Finally, you can create “bounce factors” along the curve, so progress is exponential and not sequential. For example, many people read my book Million Dollar Consulting and immediately “bounce” to participation in my Mentor Program, or my Million Dollar Consulting® College. Many companies, for which I simply keynoted, moved to place me on retainer immediately thereafter.

Can you fill in the 12 spaces I’ve provided plus the three for the vault? If not, this is a great marketing device to help you attract and propel prospects and clients toward higher value, more profitable, and less labor intensive relationships. 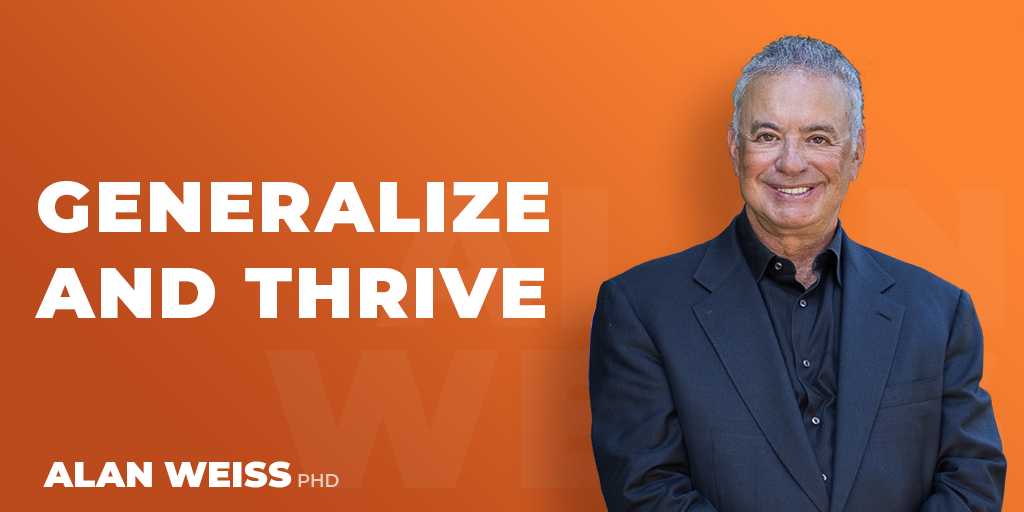 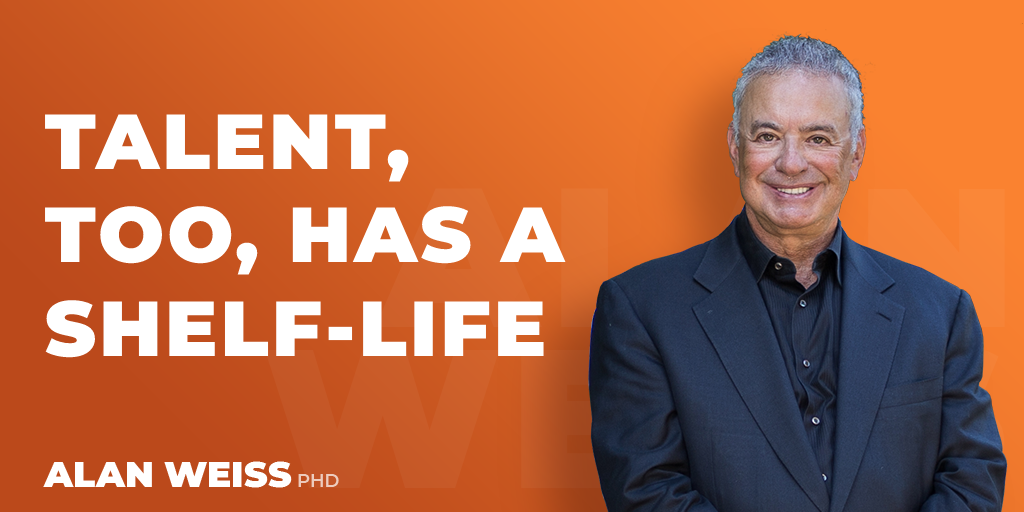 Talent, Too, Has A Shelf-Life 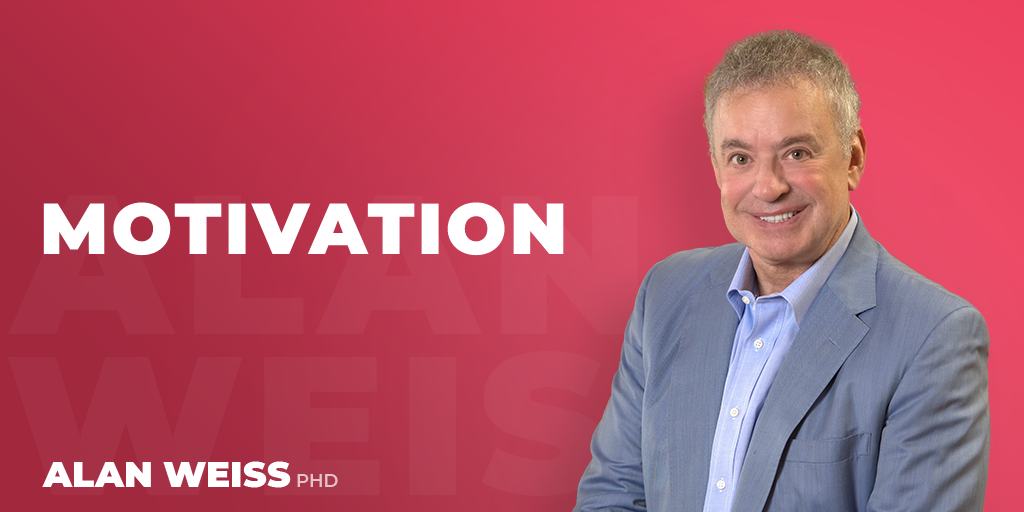 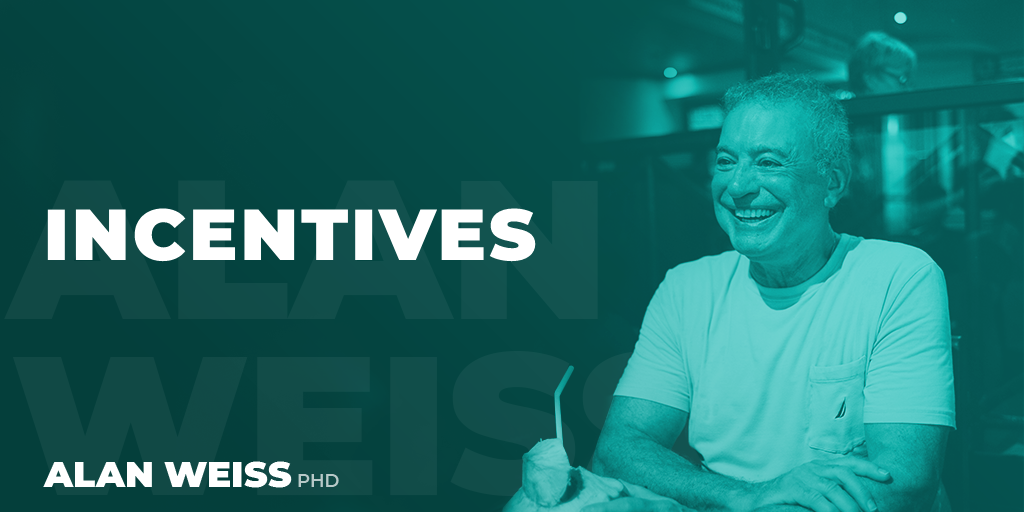